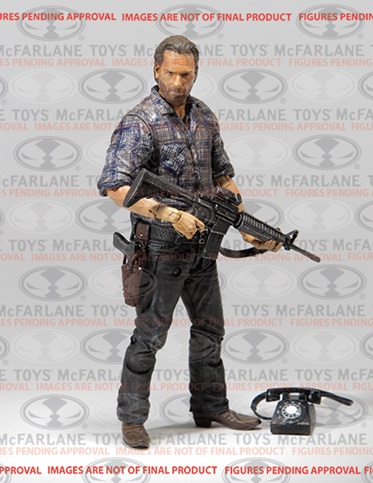 AMC’s The Walking Dead television series is now the most watched drama in basic cable history! Shattering records along the way with the release of each new season. Season 5 finds Rick Grimes and his fellow survivors continuing to seek refuge in a desolate and post-apocalyptic world and soon discover that there are greater forces to fear than just the walking dead. The struggle to survive has never been so perilous and McFarlane Toys is sitting shotgun for the ride with its AMC’s The Walking Dead action figures.

Everyone has a point where enough is enough. That point was reached by Rick Grimes when he discovered The Governor held Glenn and Maggie captive in Woodbury. Completely disregarding the fact he knew very little of The Governor and less of Woodbury, he went in ready to fight to save his friends. However good deeds do not go unpunished…saving Glenn and Maggie brought devastating consequences to him and his companions. This version of Rick from the Season 4 Episode 9 ‘The Suicide King’ shows the outfit worn during this rescue mission. The figure comes with approximately 22 points of articulation, an assault rifle, pistol, revolver, home phone, and machete.